The Ubud Monkey Forest is a nature reserve and temple complex in Ubud, Bali. Its full name as written on a welcome sign is the Padangtegal Mandala Wisata Wanara Wana Sacred Monkey Forest Sanctuary. The complex houses approximately 605 Crab-eating Macaque (Macaca fascicularis) monkeys (39 adult males, 38 male sub adult, 194 adult females, 243 juvenile and 91 infants —2011—). There are four groups of monkeys each occupying different territories in the park. The Sacred Monkey Forest is a popular tourist attraction in Ubud, and is often visited by over 10,000 tourists a month. The forest comprises approximately a tenth of a square kilometer (approximately 10ha or 27 acres) and contains at least 115 different species of trees. The Monkey Forest contains the Pura Dalem Agung Padangtegal temple as well as a “Holy Spring” bathing temple and another temple used for cremation ceremonies. The Monkey Forest is owned by the village of Padangtegal, and village members serve on the Monkey Forest’s governing council. The Padangtegal Wenara Wana Foundation manages the Monkey Forest and serves to maintain its sacred integrity and to promote the sacred site as a destination for visitors.

While the most famous from all the above three locations to see rice terrace in Ubud Bali is Tegalalang Rice Terrace Ubud. Tegalalang rice terrace field became well-known by tourists and recommended as a place to visit in Bali. Due to the locations of Ubud Tegalalang terraces, between 2 famous tourism sites in Bali, which is Kintamani and Ubud

Tirta Empul temple also known as the Holy Spring Temple located in Tampak Siring, for more thousand years the Balinese worshippers has been come to this temple for having the holy water to purified the body from Bad luck, local people believe if the water in this temple has power to clean body from negative things. a myth described if this sacred spring temple is build by God of Indra give to the dead warriors which been killed by Arrogant king Maya Denawa, the dead warrior come alive after sprang the water from this holy spring temple.

Goa Gajah is locally known as the Elephant Cave because of its close proximity to the Elephant River. A mysterious cave, relics, and ancient bathing pools set amid green rice paddies and a garden lure tourists from nearby Ubud. 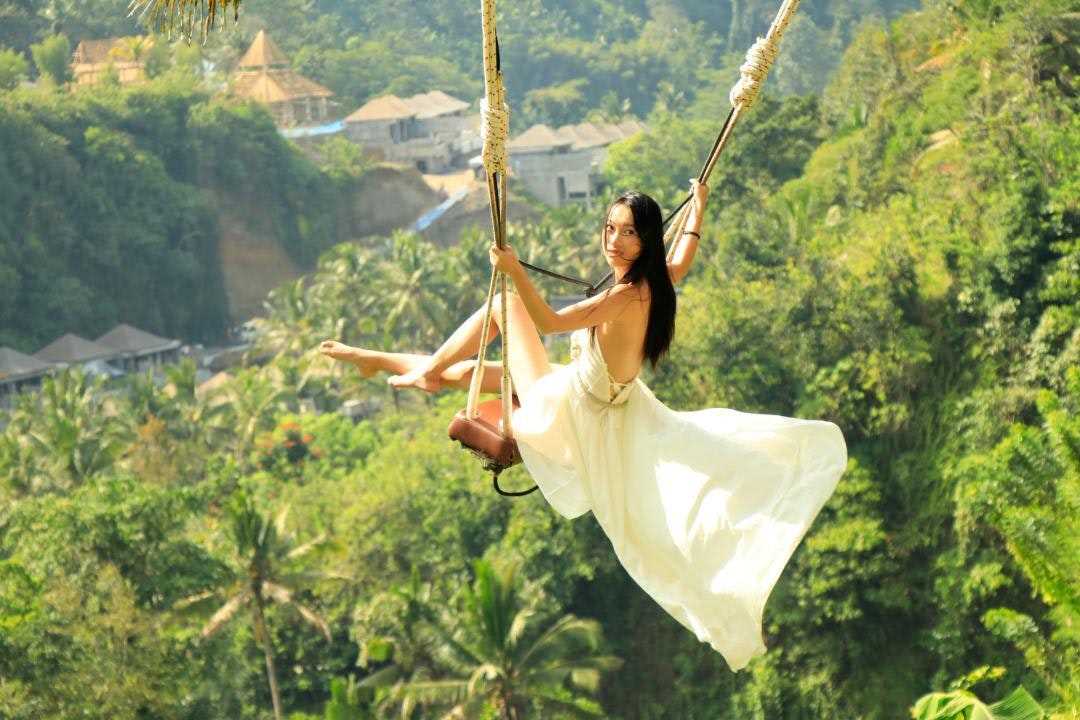 The Best Swing in the Tegallalang area, with spectacular rice paddies view, agriculture activities, Coffee Luwak plantation and shop. Our Aloha Ubud Theme Park is located only 5 km from Arjuna Statue in Ubud, on the direction to Tegallalang and many important touristic attractions, what makes our park very accessible to combine with other tourist destinations. Tibumana Waterfall is definitely one of the Bali waterfalls that is still kind of a secret.There are a number of tourists that flock to Tibumana, however it seems to be more of a favourite among locals. Along with Tukad Cepung Waterfall, these two waterfalls near Ubud are definitely worth a visit on a sunny day.